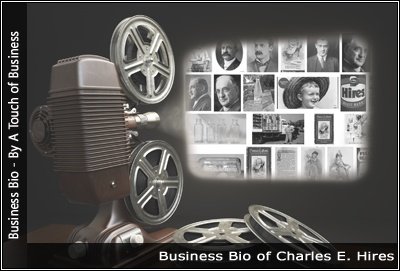 The business leader of the beverage industry, Charles E. Hires, pioneered root beer. The Hires Root Beer concoction and bottle designs are so famous, they have generated many imitators, yet the original’s corporate identity remains intact.

Hires Root Beer is currently under Cadbury-Schweppes, the maker of Dr. Pepper and Seven-Up.

Aside from root beer, Hires also forged the production of condensed milk with 21 plants across the United States.

Charles E. Hires – The Root of a Good Root Beer

A pharmacist, Charles Hires first worked in a drugstore at age 12. Four years later, he went to Philadelphia and worked in a pharmacy. Hires saved $400 and thought of opening a drugstore of his own.

The story behind Hires Root Beer dates back to his honeymoon in New Jersey. At the hotel that he and his wife were staying in, a lady offered them root tea. He liked the drink and experimented on different herbs and flavors to get the same concoction.

He thought of using the same name, root tea, but later decided on “root beer” to make it more catchy, especially for the working class. Hires Root Beer was officially established in 1866.

Ten years after the company was established, Hires Root Beer debuted in the market. At the 1876 Centennial Exposition, it was marketed as “The Temperance Drink” or “The Greatest Health-Giving Beverage in the World.” Hires wanted to highlight that his root beer was a good alternative to alcohol.

Hires Root Beer was sold in tiny packets with all the ingredients yet to be mixed and brewed. Eventually, Hires thought of pre-mixing and bottling the drink, which made a hit in the market.

Hires Root Beer begin to make its mark in the beverage industry. As part of his marketing strategy, Hires gave out trading cards, mugs, barrels, and other collectibles (which now cost thousands of dollars in value). The root beer’s fame spawned many imitators from bottle designs down to its famous slogan, “Makes Five Gallons of a Delicious Drink.”

Hires Root Beer was eventually bought by Cadbury-Schweppes in 1989.

An active member of the Quaker movement, Charles Hires spent his retirement being a part of several societies and social clubs, such as Merion Golf Club, Penn Athletic Club, and both the Pennsylvania and New Jersey Historical Societies.

The Biography of Charles E. Hires