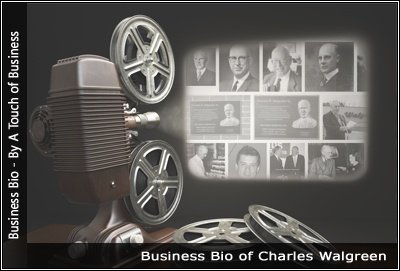 Charles Walgreen is the founder of what is now called Walgreen Co. In 1901, Walgreen purchased one of the Chicago drugstores where he worked before as a pharmacist.

From that single store, he expanded his business and in 1909 acquired two more stores. By 1913, he already had four stores and seven years later, he would grow this by another 16 stores.

Charles Walgreen kept on expanding his business and by 1929, his company was operating 397 stores.

Charles Walgreen – Unfortunate Instances Can Pave the Way for Opportunities…

Charles Walgreen was born in Galesburg, Illinois. He entered the Dixon Business College when he was 16 and got a job in a bookkeeping office.

Walgreen neither liked the work nor the pay so he quit and took another job. He worked in a shoe factory and had an accident – his middle finger was cut off. Because of this, his doctor advised him to look for another job and offered a position in one of the five largest drugstores in the town of Dixon. At first, he was hesitant but took the job anyway. Again, he was dissatisfied with this kind of job and went from one drug store to another. He went to Chicago and worked in Valentine’s drug store.

Valentine was known for scolding his employees and Charles Walgreen was not an exception. Losing interest again with his current employment, he wanted to quit the job. But before doing that, he wanted to impress Valentine first so that the man would regret losing him. But Valentine was so impressed that he started training Charles Walgreen for management and let him study the pharmacy texts to prepare him for becoming a registered pharmacist. He passed the examination in 1897 and was one step nearer his goal of owning a drug store.

During this time, the United States engaged in a war with Spain and Charles Walgreen enlisted in the Illinois National Guard. When on duty, he contracted yellow fever. This weakened him so much that when he returned to Chicago, he was not capable of working at fast-paced places like that of Valentine’s. So he decided to work in a small pharmacy owned by Isaac Blood. In 1901, Charles Walgreen bought this small drug store and this is where it all started. He started his expansion by opening other drug stores and, by 1929, he was operating 397 stores.

Charles Walgreen did not purchase any of his products. He manufactured his own drugs to ensure he provided his customers with good quality and affordable goods.

The Biography of Charles Rudolph Walgreen