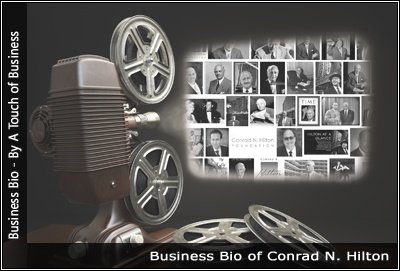 The name Hilton will not be synonymous to hotels today if it were not for business leader Conrad N. Hilton, who single-handedly built a multi-billion international empire of hotels and other businesses from scratch.

In less than three decades, he was able to acquire and build throughout the United States and other countries close to 300 hotels and inns worth billions of dollars.

Conrad N. Hilton – Building an Industry on One Name

Born Conrad Nicholson Hilton to immigrant parents (a Norwegian father and a German mother), the American dream was instilled in him at an early age and continued to grow with each passing year. As a young man, he was determined to dream big and reach great heights.

After he finished school at the New Mexico Military Institute, St. Michael’s College, and the New Mexico School of Mines, Hilton built his own store to earn enough money to fund his real dream.

Hilton began fulfilling this ambition the moment he moved to Texas, where he bought the Mobley Hotel in 1919. Realizing the great potential of the hotel business, Hilton continued buying and building more hotels, which enabled him to establish the Hilton Hotels Corporation in 1946.

Being a true risk-taker and a big dreamer, Hilton diversified his investments into other enterprises, such as car rentals, travel services, and credit cards. With the success of nearly all his financial investments, Hilton quickly rose to become one of the wealthiest men in the world.

When Hilton died at the age of 91 in 1979, he left a substantial sum to the Conrad Hilton Foundation to help support worthy causes.

Hilton’s dream to build an empire of hotels and other businesses was driven by his ambition not only to make money but also to foster peace and unity among nations. He was an active advocate of world peace and economic stability.

His efforts to support these causes led him to actively promote international trade and travel. To lend a helping hand to people who badly needed financial aid, Hilton established the Conrad Hilton Foundation, which benefits progressive research.

The foundation has contributed hundreds of millions of dollars to countless beneficiaries around the world.