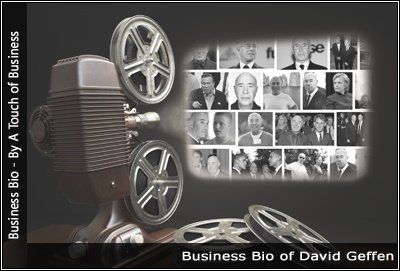 With stakes in various businesses in the entertainment industry, Geffen rose from being a university dropout to becoming a billion-dollar success.

Geffen himself confessed that he did poorly in school but his success in life, later on, proved that he is a well-gifted businessman, a gift that Geffen said he owes to the teachings of his mother who also managed a small business back then.

Geffen started in the mailroom of the William Morris Agency. He was already working as an agent at the company when Geffen quit and started his own business, Asylum Records, in 1971. Asylum eventually merged with Elektra Records to form Elektra Asylum Records where Geffen served as director.

In 1980, Geffen further moved on to establish a label named after himself, Geffen Records, which was quick to sign up singers such as Donna Summer and John Lennon, whose albums sold so much that the Geffen label rose to become one of the top recording labels in no time. Geffen Records continued to become more successful by signing prominent recording artists such as Elton John and Cher.

Geffen Records, which operated through Warner, was acquired by MCA in 1990, in a deal which earned Geffen more than $1 billion. He continued to hold a vital position in the company until he opted to quit to pursue another business venture.

Geffen is one of the most charitable billionaires in America. In 2002, Geffen donated $200 million to the UCLA medical school. He also supports and donates to other institutions and causes such as LA’s AIDS Project, NY’s Gay Men’s Health Crisis and AIDS Action in Washington, DC.
David Geffen
Geffen Records

The Biography of David Geffen