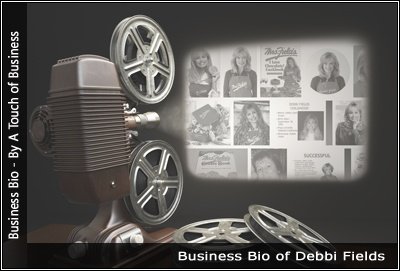 This might have been the reason why Mrs. Fields Cookies, which started in 1977 from a small kitchen, grew into a $500 million company and is at present the market leader of stores selling fresh baked cookies.

This belief also made its founder one of the few respected female business leaders of our time.

Business Leader Debbi Fields – In Pursuit of Her Passion for Cookies

Despite the discouragements and lack of support from her parents and husband, she persevered in finding people who would want to invest in her business.

Fields is quoted to have said in an interview that her parents told her she had no business going into the cookie business. She had no formal education, money and it just wasn’t going to work. But she believed in herself and in the quality of her products that after much searching and rejections from other bankers, Debbi Fields was able to get a loan of $25,000.00. And on August 16, 1977, the first Mrs. Fields Chocolate Chippery opened at Palo Alto, California.

Debbi Fields managed the shop and she became involved later, through the years, in the management, supervision and product development of all its franchises. She had continuously worked on her cookie recipes so that no one can beat her from the competition.

And her efforts, aside from her emphasis on customer service, worked. From 1977 to 1984, one hundred and sixty Mrs. Fields stores in America and four other international bakeries generated $45 million in revenue. At present, there are more than 900 Mrs. Fields bakeries in the US and in 11 other countries – company-owned and franchises.

Mrs. Fields, Inc. also made history in 1989 when the company became the first in the food retailing industry to use a pioneering computer system to restructure production schedules and operations. Such is the significance of this program that the Harvard Business School cites it as a successful use of technology in business management.

Fields is also a successful author of several cookbooks wherein the first book, 100 Recipes from the Kitchen of Debbi Fields, made it to the New York Times bestseller list and has sold more than 1.8 million copies worldwide.

The second book, I Love Chocolate was successful as well and sold 500,000 copies. Aside from cookbooks, Fields also hosted her own TV show called Great American Desserts”.

At present, Debbi Fields is a consultant to her own company and is a member on the boards of the public TV radio station – WKNO, Outback Steakhouse and The Orpheum Theater.