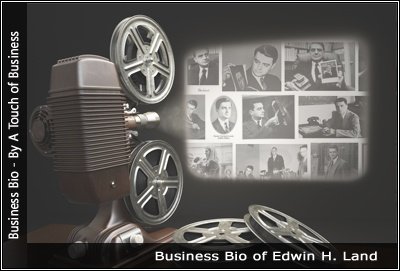 The Guinness Book of World Records once named Land as the world’s richest scientist.

Land went to Harvard to study chemistry but left for New York City at the end of his freshman year. While there, he designed the first inexpensive light polarizing filters, accomplishing this even without being affiliated with any school. His lack of resources never discouraged him from pursuing his vision.

Stories are told of how, late at night, Land would sneak into the Columbia University lab to use the equipment to test his theories. For prior scientific work on polarizing material, he used the New York City Public Library.

Having invented the polarizing film, he decided to go back to Harvard. But he still did not work to receive a degree. Instead, he worked at turning several ideas on polarization into reality.

Land shared his vision with his Harvard physics teacher, Wheelwright. His teacher came from a rich family and agreed to provide funding for the establishment of the Land-Wheelwright Laboratories in 1932. Five years after the company was established, Land changed its name to the Polaroid Corporation. Its trademark Polaroid polarizing sheets were used in Polaroid sunglasses and several scientific applications.

Pretty soon, Land developed other applications for the technology, such as 3-D glasses and controlling light intensity through windows. The latter became a crucial component of LCDs.

Even World War II provided Land with the purpose to find more applications for his technology, such as night-vision goggles, target locators, the world’s first passively guided bombs, and stereoscopic viewing technology that showed camouflaged enemy posts in aerial shots.

But the Polaroid king knew that his military contracts would eventually taper off and he needed a product with ah… ‘peacetime’ applications. Inspiration hit him while on vacation with his three-year-old daughter. At the end of a day of sightseeing, Land’s daughter wanted to see the photos they took.

He tried to explain to her why she could not see them because they still had to be developed, but that did little to comfort her. Three short years later, in February 1947, Land unveiled his instant camera and its film before the public. The Polaroid Camera soon became available commercially.

The Boston department store Jordan Marsh offered the first 57 camera units before Christmas 1948, thinking that stocks would last until the second production run. But all the cameras and film were sold out on the first day.

Key success traits:  A devotion to work bordering on obsession; driven to research and putting in long hours until an idea is turned into reality; as a scientist, he made it a habit to perform one experiment per day.

Additional:
Land was notorious for engaging in prolonged research sessions where he would brainstorm a problem to its solution without taking any breaks. Eventually, the Polaroid Corporation could provide shifting teams to work alongside the indefatigable Land. After he wore out one team, the next would take its place so Land could work nonstop. He was at Polaroid’s helm for 43 years. He passed away in 1991 at age 82.

The Biography of Edwin H. Land