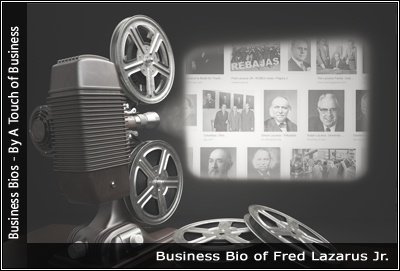 Using acquisitions and internal growth to build his business, Fred Lazarus Jr. turned his Federated Department Stores into the biggest enterprise of its kind in America. The retail operation, which includes Bloomingdale’s, Bullocks, and Filene’s, targets the middle class with eye-catching displays, seasonal fashions, and well-stocked inventories offered at the lowest prices possible.

Moreover, he is credited with establishing in American stores, the merchandising standard of presenting garments by size with style color options.

The young Lazarus learned his trade at F. & R. Lazarus, the modest, family-owned department store. He studied at Ohio State University but left almost immediately to work at the family store full time at age 18.

Under Lazarus, the business expanded, most notably around 1929-1930. The year saw the merger of the family business with New York’s Bloomingdale’s, Brooklyn’s Abraham & Straus, and Boston’s Filene’s. The new conglomerate was called Federated Department Stores and had Lazarus as chairman.

By 1939, he had gained financial and political power. Lazarus was able to convince the President of the United States at the time, Franklin D. Roosevelt, to move Thanksgiving, making it officially the fourth Thursday in November. This prolonged the time for Christmas shopping and, in effect, boosted revenues for the American retail industry. Congress made the arrangement official in 1941.

Lazarus continued to nurse the growth of Federated via acquisitions and mergers, particularly through the 1980s.

As a result of the mergers orchestrated by Fred Lazarus, his company had become so huge. While his competitors were issuing branded credit cards provided by an outside bank, his store chain offered cards issued by its own bank, the Federated Department Stores Bank.

The Biography of Fred Lazarus Jr.