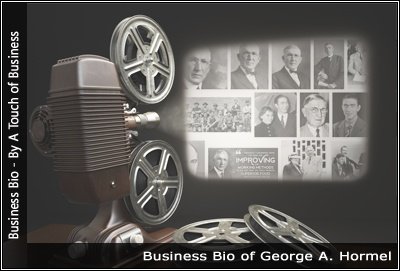 Canned food, particularly canned meat products, is a staple in every American home today. This was not the case back in the early 20th century when canned food was considered unnatural and foreign.

George A. Hormel changed this view when he introduced his line of canned meat, which became so popular that his company, the Hormel Company, continues to thrive to this day.

Born in 1860 in Toledo, Ohio, Hormel grew up around slaughterhouses where he first worked as a hired hand. As a young man, he moved to Austin Minnesota where he decided to settle down. Equipped with knowledge and skills in the meat business, Hormel thought of establishing his own meat processing and packing enterprise.

With $500 as a capital investment, Hormel put up George A. Hormel & Co. with an old abandoned creamery building serving as the company headquarters.

Hormel’s meat business started with a few livestock, which grew to a couple of hundred, and then to thousands by 1893. By then, Hormel’s brothers John and Herman had joined the rapidly growing business. By the beginning of the 1900s, the Hormel Company was operating an expanded meat-processing plant and a handful of distribution branches all over the United States, including Minneapolis, Dallas, Chicago, and Atlanta.

It was in the 1920s when Hormel created the biggest breakthrough in the meat packaging business. His company introduced America’s first-ever ham in a can, the Hormel Flavor-Sealed Ham. The product was so successful that Americans who were not used to canned food began buying them in bulk.

Throughout the succeeding decades, Hormel was able to introduce a complete line of processed and canned meat. The lineup included different varieties of ham, beef, and chili. One of the most famous Hormel products was Spam luncheon meat, which remains a staple item in the kitchen shelves of homes around the world.

Hormel eventually passed on his responsibilities as head of the company to his son, Jay C., who was able to grow his father’s company even bigger. Hormel passed away in 1946.

The George A. Hormel Quick Bio

Known to be genuinely compassionate toward his employees, Hormel gave them good wages and reasonable working hours. This principle was deeply instilled in the Hormel Company, making it strong and stable throughout the years.

The Latest Google Search Results Related To George A. Hormel

The Biography of George A. Hormel

Books Related to George A. Hormel

Books from Amazon Related to George A. Hormel

Tweets Related to George A. Hormel

Videos Related to George A. Hormel