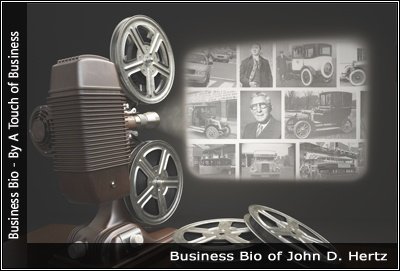 In the early 20th century, transportation and livery services could only be afforded by affluent members of society.

Common folk back then had to settle for dusty commutes in inexpensive public transportation to get from one location to another. John D. Hertz saw a big opportunity in this situation.

He thought of a way to bring the convenience of personalized, door-to-door transportation services closer to the masses by founding the Yellow Cab Company. A firm that provided easy-on-the-pocket transport services to anyone who could pay a few dimes to a meter.

Born in a small Slovakian village as Sandor Herz, John D. Hertz migrated to the United States at a very young age.

Remaining true to his vision of providing affordable transportation to the average American, Hertz moved on to establish another business in 1924: the Hertz Drive-Ur-Self Corporation, which provided inexpensive car rental services.

This business leader invested some of his money in the Lehman Brothers Investment Bank in New York in the early 1930s. Around the same year in his farm in Illinois, he tried his hand at racehorse breeding, which later became one of his passions. He was so successful at pursuing this passion that he was able to produce a number of thoroughbred champions.

As a philanthropist, Hertz and his wife, Fannie Kesner, put up the Fannie and John Hertz Foundation to help fund and promote applied sciences education. Hertz died at the age of 82 in 1961.

The color yellow, which is strongly associated with the Yellow Cab Company, was chosen by Hertz himself, after a survey showed that most people think that it is the color that is easiest to see, even on a crowded street.

Hertz was the first civilian to receive the highest award given by the US Department of Defense for his contribution in the field of national security.