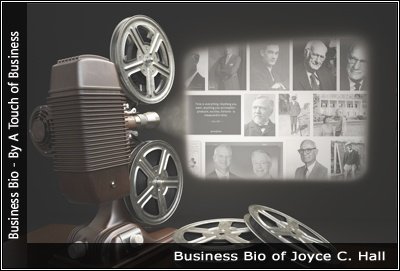 “When you care enough to send the very best” is a slogan recognized the world over; and it says much about greeting card business leader Joyce C. Hall and his multi-billion-dollar enterprise, Hallmark Cards.

Hall did not only conquer the greeting card industry, but also ventured into art supplies, land development, and media entertainment. His guiding principle of excellence and rendering quality service made him very successful in almost every enterprise.

Joyce C. Hall – He Wanted Cards for All Occasions

Coming from a religious family, Joyce Hall was named after Methodist bishop Isaac W. Joyce who visited their city on the day he was born. At age 9, he helped his family by selling cosmetics for the California Perfume Company (now Avon Products Inc.).

When their father died, the Hall family moved to Norfolk, Nebraska where the brothers put up a bookstore. With the help of a salesman, Hall convinced his brother to buy postcards and resell them. With a capital of $150, the Norfolk Post Card Company was formed in 1907.

When he turned 19, he dropped out of high school and went to Kansas City with two shoeboxes of postcards with him. In Kansas, Hall sold his postcards to bookstores and gift shops. After a year, his brother joined him and that led to the formation of Hall Brothers. They sold not only postcards but also Valentine and Christmas greeting cards.

Unfortunately, the shop caught fire; but it was revived in 1915, the same year when the Hall Brothers began printing their own greeting cards. Years later, the Hall Brothers printed and sold friendship cards and gift wrappers. From 1920 to 1950, Hall made several changes, including revising the company trademark to read, “A Hallmark Card” and investing in TV advertising.

In 1925, greeting cards with the Hallmark trademark were circulated in the market. He started sponsoring television shows, such as Hallmark Hall of Fame which was first aired in 1951. It was only in 1954 when Hall Brothers changed its name to Hallmark Cards Inc.

Hall retired in 1966, but he continued supporting the company. Though retired, he ventured into other fields resulting in Hallmark now housing Hallmark Entertainment, Hallmark Channel, Binney and Smith’s Crayola, Univision, Crown Center, and other commercial and residential properties.

A philanthropist, Joyce Hall formed the Hallmark Corporate Foundation, a nonprofit organization providing funds for Kansas City’s schools and institutions. Among Hall’s recognitions are Eisenhower Medallion, Horatio Alger Award, and the first Emmy award is given to a television sponsor.

The Biography of Joyce C. Hall