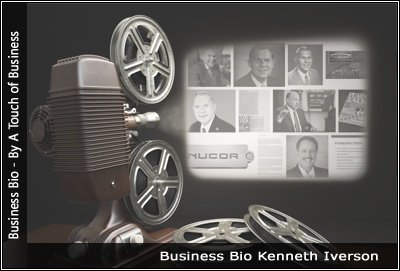 F. Kenneth Iverson is known for how he turned business around for Nucor Corporation. This American steel manufacturing company was on the brink of bankruptcy in the 1960s.

But with Iverson at its helm, it not only became profitable once again but also grew to be admired all over the world.

F. Kenneth Iverson – No-frills Management
It was during Iverson’s term as CEO of Nucor Corporation that he was able to transform the company.

It was with the mini steel mill that Nucor became a force to be reckoned with in the American steel industry. Its mills were producing tons of steel every year and raking in profits.

Aside from innovations in manufacturing, Iverson was also responsible for management decisions that helped the company resurrect from near bankruptcy. He employed a small management team in order for decisions to be made across the board instead of depending on a few people.

Equality in the workplace was also stressed. Under Iverson, Nucor Corporation employees were treated equally, whether they were top-level executives or rank and file employees.

Moreover, Iverson did not locate the corporate office at the manufacturing plant. He gave the production facilities enough freedom so that they could carry out their own policies and decisions without management interfering at every turn.

But perhaps one of the most admirable traits of Iverson was how he did away with some of the benefits given to executives. His corporate office actually had only 22 employees, and it is said that Iverson would even answer his own phone when he was in the office.

Iverson has always valued the worth of every single employee in his corporation. This business leader proved that even when an entire industry was suffering slowdowns, it was possible to not fire any employee. The business model of Nucor Corporation allowed profit-sharing among employees, even as it constantly utilized the latest technology. The company continued to post profits even when cheaper imports from Asia became readily available.

Iverson treated all employees equally. He also empowered them to make business decisions as they deemed most beneficial to their business.

Iverson passed away in 2002, but the legacy of empowering employees he left behind at Nucor Corporation continues to be practiced and experienced today.