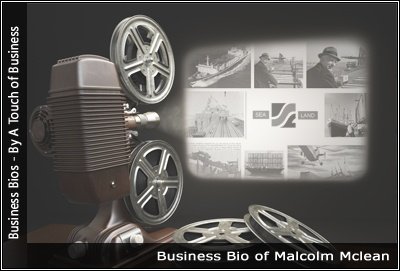 Malcolm P. McLean was a truck driver who changed the world. He took a fairly plain concept and put it in practice. McLean, the owner of Sea-Land Service, is credited for coming up with the containerization idea.

His discovery changed the way freights were shipped in the United States and the world over forever.

Prior to 1956, all maritime cargo was moved on a piecemeal basis using the break-bulk process.

Such freight handling was slow, repetitive, and exposed cargo to theft and damage.

McLean revolutionized the way cargo was handled and made it more efficient and cost-effective.

People were able to say goodbye to the traditional break-bulk handling of goods thanks to Malcolm P. McLean’s containerization idea. In business, time is money. McLean knew this and did what he could to speed up cargo handling and transport.

McLean, with his two siblings Clara and Jim, started a trucking business – McLean Trucking Co. in 1934. The trucks hauled empty used tobacco barrels. By the ’60s, McLean Trucking ranked fifth among the largest US trucking companies.

The idea of inter-modal containers struck McLean while transporting a load of lumber to a port. He was observing the long process of loading and unloading ships when inspiration hit him.

McLean imagined trailers carrying boxes and loading them at shippers’ doors completely sealed and then sending them by truck to ports, lifting them off the chassis, and storing them aboard ships. Upon the arrival of the cargo at their destination, the process would simply be reversed.

Not everybody thought the break-bulk business required changing. US railroads shot down McLean’s idea numerous times. Shipping lines knew it required large investments in new equipment and vessels. Container ships would require additional docking space, special repair, and shipbuilding facilities.
Through all these, McLean persevered. He poured all of his capital into the venture and never once asked for government support. Sometime in the ’50s, McLean sold his interest in the trucking business and bought Pan Atlantic Steamship Company. He acquired four ships and invested in the building of his inter-modal trailers.

Malcolm P. Mclean’s innovations in shipping containerized cargo helped reinvent the shipping industry. This is why McLean deserves the distinction of being called a business leader. McLean died on May 25, 2001. He was 87 years old.

The International Maritime Hall of Fame named Malcolm McLean as the Man of the Century for his work on containerization. Fortune magazine included McLean in its Hall of Fame in 1982.

The Biography of Malcolm Mclean