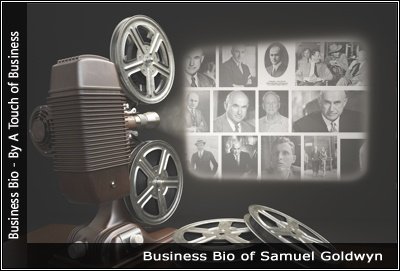 The pioneer of the independent motion picture, Samuel Goldwyn inspired numerous top producers in Hollywood to create their own films independently.

Goldwyn earned several Oscar awards and nominations in his more than 40 years in the business including a Best Picture Oscar award for ‘The Best Years of Our Lives’ which registered total earnings of $10 million during the 1940s.

Samuel Goldwyn – Going Solo was His Way to Success

Originally named Schmuel Gelbfisz, Goldwyn was born in 1882 to a Polish Jewish family. When his dad passed away, Goldwyn left his hometown in Poland and went on an ‘on-foot trip’ to Europe where he worked at a blacksmith shop.

It was at this time he changed his name to Samuel Goldfish. At age 19, Goldwyn continued his journey to the United States where he worked in a garments factory as a salesman. After five years, Goldwyn left the factory as its Vice-President.

In 1902, Goldwyn spent most of his time watching films in America. Fascinated by the art of filmmaking, Goldwyn partnered with Jesse L. Lasky, his brother-in-law, on a business venture. His fascination for motion pictures and Lasky’s experience as a stage producer resulted in the first film The Squaw Man under the Jesse L. Lasky Feature Play Company.

A few years later, the company merged into Adolph Zukor’s company, forming Famous Players-Lasky (now known as Paramount Pictures). The partnership did not last and Goldwyn resigned in 1916.

By 1916, Goldwyn partnered with the Selwyn brothers that led to the creation of Goldwyn Pictures Corporation. Inspired by the company’s name, he officially changed his English-sounding surname Goldfish to Goldwyn in 1918.

However, not much of a social person, he was forced to leave Goldwyn Pictures Corporation which eventually became Metro- Goldwyn -Mayer.

On his own, Goldwyn established Samuel Goldwyn, Inc. in 1925. The same year, he remarried and had his first son named after him. As a solo producer, Goldwyn successfully uncovered actors, directors, and writers through his productions.

Under Samuel Goldwyn, Inc., Goldwyn received a number of Best Picture Academy Award nominations for films such as ‘Arrowsmith‘, ‘Dead End‘, and ‘Wuthering Heights‘ during the 1930s to 1940s. Goldwyn’s awards and recognitions continued up until his last film in 1959; his version of the George Gershwin Opera, ‘Porgy and Bess‘, won three separate Oscar awards.

After Goldwyn’s death in 1974, Samuel Goldwyn, Jr. continued producing films with the same caliber as his father’s.

The Biography of Samuel Goldwyn