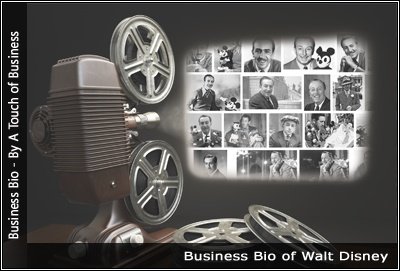 A magical world is almost every kids’ dream and it was the dream of one man too. Walt Disney is one of the most famous business leaders of our time who bridged the past and the future through his magical world of wonder.

“When You Wish Upon A Star,” one of Disney’s famous musical scores, says it all. Indeed, Disney’s imaginative thoughts led him to be very successful in the entertainment business. Just like the Carolwood Pacific Lily Bell ride at his backyard, Disney’s success tells a tale of a roller coaster ride.

Disney’s story of success roots from his early childhood days during his stay at Marceline, Missouri, and Kansas City. His love for drawing was inspired by a farm where he lived with his family and by the tracks of Santa Fe Railroad where he worked selling candies and newspapers.

Coming back from WWI in France, Disney asked for his father’s support to begin his artistic career. Rejected, Disney tried his luck by himself and worked at the Pesemen-Rubin Art Studio where he met Ubbe Iwwerks.

In 1920, Disney and Iwwerks put up their own company “Iwerks- Disney” which eventually collapsed. Soon after, they both joined Kansas City Film Ad as animators. Disney’s Film Ad days made him venture into animation experiments which led him to form Laugh-O-Gram Films in 1922.

Disney produced short cartoons and later live-action films such as Alice’s Wonderland. With Alice’s Wonderland unfinished, Laugh-O-Gram Films filed for bankruptcy. Disney went to Hollywood to try film direction but with no such luck and not much of an experience, he then asked his brother, Roy, to finance him to put up again a studio, Disney Brothers’ Studio. In 1925, Disney hired more people to join his team.

The Disney studio grew through Oswald the Lucky Rabbit’s success. Unfortunately, Disney lost the rights to the Oswald character along with his staff in 1928. This downfall led to the creation of Steamboat Willie where Mickey Mouse became his popular cartoon character. Disney regained the studio and even got an Academy Award in 1932.

During the 1930s, Disney started to produce full-length features such as Snow White and the Seven Dwarfs, earning $8 million. The big break was short-lived due to WWII and slowly recovered in the late 1940s. Disney continued producing Peter Pan and Alice in Wonderland full-length pictures also adopting Technicolor and sound scores for his works.

The birth of Disneyland along with other theme parks came during the 1950-1960s. It was at the same time when Disney had its first daily TV show now widely known as The Wonderful World of Disney. The following years after his death in 1965, Walt Disney Company continually expanded through the opening of Magic Kingdom, EPCOT, Disney -MGM Studio Theme Park, and the 2005 acquisition of Pixar Animations.

A few years before Disney died, he established the California Institute of Arts, which was one of his lifetime dreams, to develop future talents in the creative and performing arts.

The Biography of Walt Disney