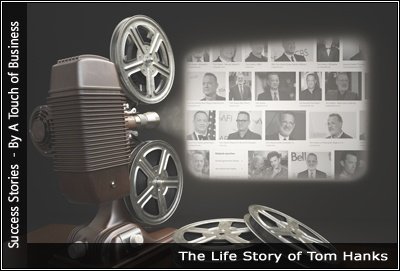 A Collection of Resources to Tell the Story of Tom Hanks

“Life is like a box of chocolates. You never know what you’re going to get.” – Tom Hanks as Forrest Gump

“Tom Hanks” might sound like a stage name, but we can assure you that it’s not. Born in California in 1956, he’s built a name for himself as one of America’s (and the world’s) favorite actors, starting out in comedies before proving himself as a “serious” actor in several iconic dramas.
Hanks spent much of his childhood on the move, but he always came back to his Californian roots and ended up studying drama at California State University before moving to New York City to pursue his dream of becoming a movie star.

His First Role Was In A Horror Movie

It might surprise you to know that his first-ever role was in a horror movie, although it was arguably 1984’s Splash which really started to cement his reputation. He was given a boost in 1988 after being nominated for an Academy Award for his depiction of a boy trapped in an adult body in the movie Big.

But it was the 90s that really turned him into an icon, in part because of his performances with Meg Ryan in Joe Versus the Volcano, Sleepless in Seattle and You’ve Got Mail. This period also included A League of Their Own, Apollo 13, The Green Mile and Saving Private Ryan.

Hanks was also lucky enough to win that elusive Academy Award in 1993 for Philadelphia, and he followed it up with another one for 1994’s Forrest Gump.

In the early 2000s, Hanks landed several of his most iconic roles, including his performance in Castaway. Perhaps he’s even more well-known for voicing Woody in the Toy Story movies, a role that he’s maintained for over 25 years, but that’s not his only repeat role. He also plays Robert Langdon in the movie adaptations of Dan Brown’s successful series of novels.

A Fan of The Written Word

Hanks is clearly a fan of the written word, as is shown by his appearance in a number of other movies that are based on books including Catch Me If You Can, Extremely Loud and Incredibly Close, A Hologram for the King, The Circle, and Cloud Atlas. These appearances seem to have given him the bug, which is why in 2017, he released a book of short stories called Uncommon Type.

He’s even stepped out of our cinema screens and onto Broadway, as well as sharing his experience as a producer on a number of well-known movies including Band of Brothers and The Pacific. As if that wasn’t enough, he’s even written and directed a couple of movies including That Thing You Do! and Larry Crowne, the latter of which he also starred in opposite Julia Roberts.

The Presidential Medal of Freedom

All in all, he’s a true Hollywood success story and an inspiration to many of the actors who’ve followed in his footsteps. Perhaps that’s why he was awarded the Presidential Medal of Freedom in 2016, an accolade that must surely rank alongside his Oscars. And he isn’t quite finished yet!

List of awards and nominations received by Tom Hanks – Wikipedia

21 Quotes From Tom Hanks Movies That Will Make You Love People Again | Inc.com

Tom Hanks reveals struggle with loneliness during childhood | The Independent

Tom Hanks: ‘I’ve made a lot of movies that didn’t make sense – or money’ | Film | The Guardian

20 Facts About Tom Hanks’ Career That Fly Under The Radar

People are sharing heartwarming stories about Tom Hanks, “the nicest guy in Hollywood”

The Latest About Tom Hanks

Tags
By Acey Gaspard
Copyright © 2019 atouchofbusiness.com. All Rights Reserved
Disclaimer: The publisher and author of the information on this page are NOT liable for any damages or losses associated with the content. You must do your own research to determine what's best for you. It's you that is responsible for own business decisions and actions.
We use cookies to ensure that we give you the best experience on our website. If you continue to use this site we will assume that you are happy with it.OkNoPrivacy policy