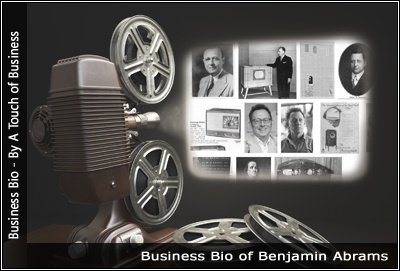 Benjamin Abrams is famous for founding the Emerson Radio and Phonograph Corporation together with his brothers, Max and Louis.

His company produced several pioneering gadgets back in the 1920’s such as the clock radio, mini radio, self-sustaining handy radio.

Later on, the company also manufactured television sets, tape recorders, and microwave ovens. Abrams continued to serve as chairman and CEO of the company until 1966.

Generally, his company became widely popular for creating the very first radio-phonograph, which generated millions of dollars in sales.

Benjamin Abrams was born in Rumania in 1893 but grew up in the United States when he migrated in 1905. He started out selling magazines and fixing pianos and learned about the phonograph and radio business when he was working as a salesman.

Initially, the Emerson Radio Company was owned by Victor Hugo Emerson. Benjamin, Max, and Louis Abrams then borrowed money to buy the then-small business in 1922. After two years, the company was called Emerson Radio and Phonograph Corporation after the introduction of the first radio-phonograph combination.

Abrams’ company continued to manufacture other electronics such as radios, air conditioners, and televisions which sold hundreds of thousands of units even during the Great Depression. Abrams also had his share of the worst when consumers started to prefer color televisions over replacement sets. The company only earned a very small fraction despite its massive investment in expansion.

Abrams thought of a way to minimize costs and improve his product line which earned millions and saved the company from going bankrupt. Before Benjamin and his brothers retired in 1966, the corporation has grown significantly owning several subsidiaries and producing over a hundred different items.

The Emerson Radio and Phonograph Corporation was acquired by the National Union Electric Corporation just before Benjamin Abrams’ retirement.

Abram gave financial support to other electronic endeavors as well. He helped establish the Benjamin Abrams Communication Center at C.W. Post College and an electronics laboratory in Rehoveth, Israel.

Over the years, several investors have purchased stocks of Emerson and the company has been divided over a number of other names and subsidiaries.

Tags
By Written For A Touch of Business
Copyright © 2021 atouchofbusiness.com. All Rights Reserved
Disclaimer: Information on this site is intended for educational purposes. The publisher and authors are not liable for any damages or losses associated with the information contained on this website.
This website uses cookies to improve your experience. We'll assume you're ok with this, but you can opt-out if you wish. Cookie settingsACCEPT
Privacy & Cookies Policy